Nikola Tesla, the most brilliant mind of the mankind and the man who gave an invaluable contribution to the civilization, was born in Smiljan in 1856. He attended elementary school and high school in Smiljan, Gospić and Karlovac. He studied in Graz and Prague, worked in Budapest and Paris until 1884, after which he went to America. His most important inventions are the polyphase system, rotating magnetic field, induction motor, synchronous motor and Tesla coil. Tesla discovered a way of generating high-frequency current, made a significant contribution in the transmission and modulation of radio signals, and his work in the field of X-rays did not go unnoticed. His system of alternating current has enabled much easier and more efficient transmission of electricity at a distance. He was a key figure in the construction of the first hydroelectric plant at Niagara Falls, where a bronze monument was erected in his honour in 1976. He died in New York in 1943.

It is undisputed that Nikola Tesla is credited for numerous things without which today we could not imagine everyday life. It is clear that today’s world would be completely different if it were not for his inventions and more than 700 patents which he is credit for. All in all, a story about life’s journey and inventions of this scientist leaves no one indifferent, and each new piece of knowledge makes the story more interesting and intriguing.

A few years ago, the group of admirers of his work set up the “Teslianum”, an organization that aims to contribute to the systematic study of Tesla’s life and work. This idea was fully supported by Slobomir P University and its founders, Mr. and Mrs. Pavlović, by giving one of their classrooms in Slobomir and setting up “Tesla and Pupin Classroom”. Documents and patents, which in an affirmative and promotional manner depict the lives of the great scientists of the world are exhibited here today. 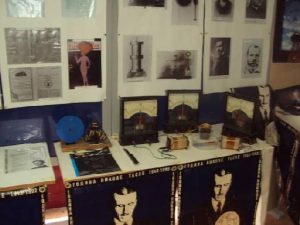 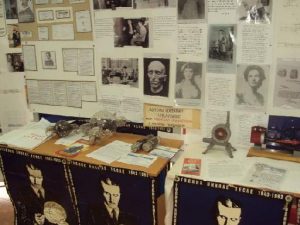 The so-called, “Tesla and Pupin Classroom” is an authentic representation of the work of Nikola Tesla. It was designed as a museum exhibit, but also as the place for studying and developing ideas. Pupils, students and others are given the opportunity to acquaint themselves with the work of these scientists, and also to take a look at and try out some of the exhibited inventions. Everyone has the opportunity to read the latest literature on Tesla’s achievements, thus assuring themselves of the significance of Tesla’s contribution to the world we live in today.

“Teslianum” was conceived as an institution from which spiritual strength of Tesla’s ideas would radiate and which would gather the gifted and encourage them to create, through a variety of activities. Among the institutions set up in Tesla’s name, “Teslianum” makes its contribution for the Tesla’s work to be systematically studied in order for it to be represented in the right light, in the history of electrical and radio engineering.